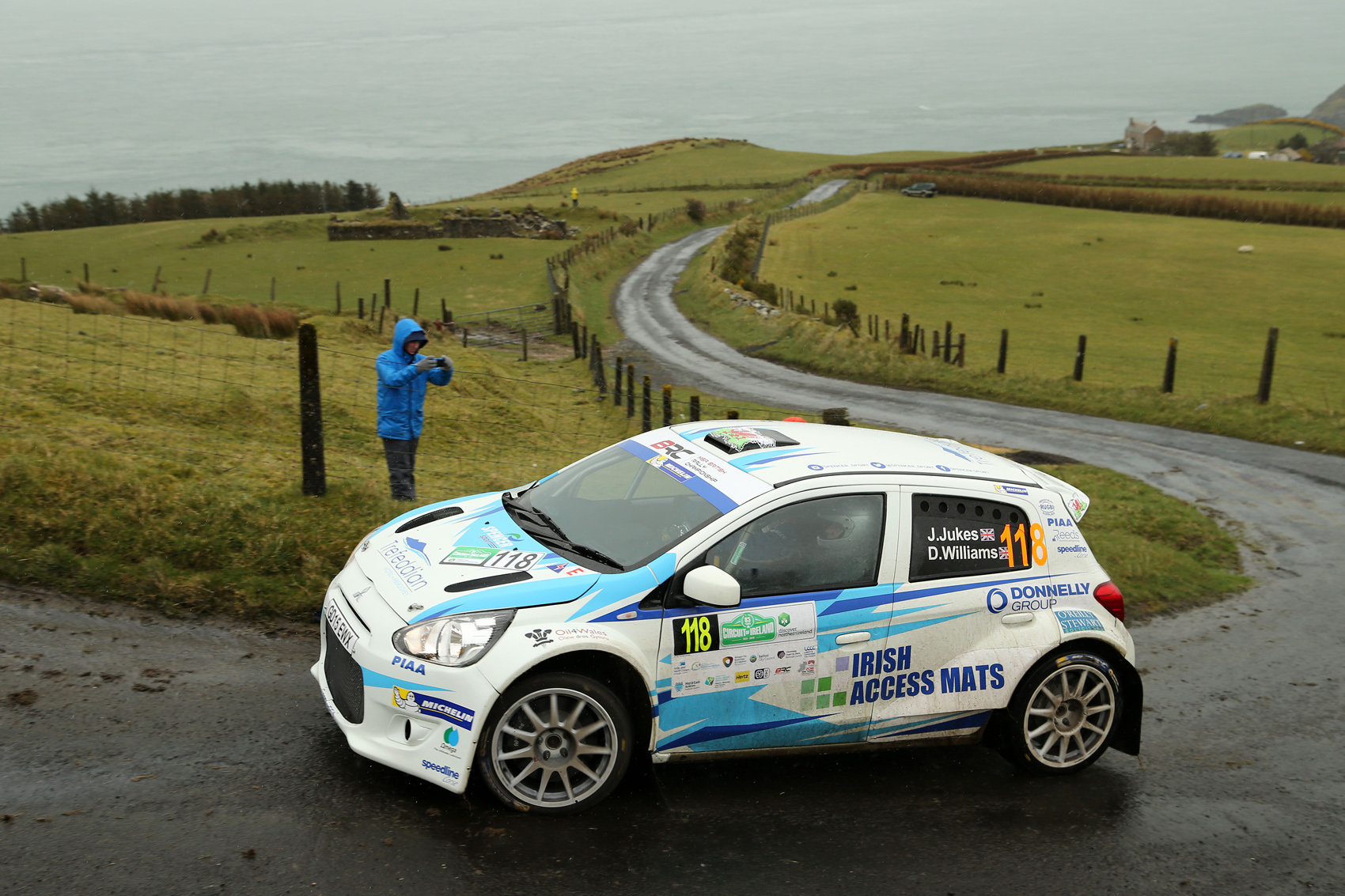 The Circuit of Ireland Rally – the second round of the MSA British and FIA European Rally Championships – took place on 8th & 9th April and saw the Spencer Sport team surpass its expectations. Tom Cave and co-driver James Morgan finished fourth in the BRC and sixth in the ERC in their Fiesta R5, whilst Jamie Jukes and Dave Williams brought their Mitsubishi Mirage home second in the BRC National Rally Cup.

Taking place over two days, the event featured six stages on closed public roads north of Belfast on Friday, with a further eight south of the Ulster capital in the County Down hills on Saturday. Due to its European status, the event saw some of the best teams and drivers from the UK, Ireland and overseas lined up for the ceremonial start in Lisburn on Thursday evening.

With the roads in the region renowned to be challenging at the best of times, patches of mud coupled with dry conditions on Friday morning followed by rain in the afternoon, made the levels of traction a lottery for even the most experienced of drivers.

After the first loop of three stages, Cave admitted that with this his first event on asphalt in the Fiesta, he was still getting to grips with the car, even though the Michelin tyres were working well. However, the wet roads in the afternoon levelled some of the competition and he and Morgan climbed three positions to end the day seventh of the BRC runners and just outside the top-ten overall.

With the weather dry and more settled on Saturday, their confidence increased as they set off on the first loop of four stages – and it showed – as they pulled into the lunch time service halt as fourth BRC crew and eighth overall. However, Cave reported his Fiesta’s gearbox was feeling ‘tight’, but after an inspection by the team, it appeared that it would last the rally – which it did.

Aside from mindful use of the gearbox, with everything else about their Fiesta running perfectly, Cave and Morgan were able to continue their ever-improving run through a repeat of the morning’s four-stage loop to consolidate their position to finish fourth BRC and sixth ERC crew home. Consequently, after scoring an impressive third place in round one, their result in Northern Ireland means they now lie equal fourth in the British Rally Championship standings.

Jukes and Williams’ baptism of fire with their Mitsubishi on asphalt started well and, following a really solid performance, they ended day one second in the BRC National Rally Cup standings and a very respectable 13th in the National section of the rally overall.

Having coped with the slippery conditions on Friday – albeit reporting a few ‘interesting’ moments – other than a spin on stage eight that cost at least 30-seconds, Jukes defied his knowledge of Irish tarmac enabling he and Williams to take second place in the BRC National Rally Cup and finish eighth overall in the National category.

Once again, Spencer Sport provided support for Swedish crew Robert Blomberg and Lars Andersson and their Mitsubishi Mirage. Also running in the BRC National Rally Cup and the National section of the event, after spinning off the road, breaking a wheel and having to retire on Friday, the car was transported back to Belfast and soon fixed, enabling them to restart on Saturday.

Also having to cope with a steep learning curve on their first visit to the Irish lanes, they were pleased to get to the finish on Saturday. And, even after having to stop and change a wheel after clipping a stone on the final stage, they ended the event fifth BRC Cup crew home and now hold third place in the points table.

The team will be back in action in three weeks time, when the surface switches back to gravel for the Pirelli Carlisle Rally. The event takes place on 30th April & 1st May and features the infamous stages of Kielder forest.